Role-Playing Must Be Fun

This gradually became, within the past few years, how all instances of evolution of the game's design have been explained to the masses.

D&D is a game that ought to be fun. To increase the fun, it thus needs to be faster in game play. It needs to be easier to grasp. It needs to provide all sorts of elements that help players and DMs imagine as quickly as they possibly can, with the most "fun" value out of it. Okay, I guess, but... what kind of "fun" are we, in fact, talking about?

Never, in the last edition's text, do we get a comprehensive explanation of what, exactly, is supposed to be fun when playing role-playing games. I suspect that's where the fallacy of Fourth Edition began: the challenge of 4e's "design team" was to pick up Third Ed and instantly wonder "how do we get this game to be more fun?" rather than "what makes role-playing games fun?" in the first place!

I suspect that the fun that makes one play role-playing games has in fact nothing to do with "game balance" (which truly means "rules' balance in a vacuum" - maybe more about this later). It has nothing to do with the relative complexity of a game system, though it can affect the long term engagement of a player with a particular game. 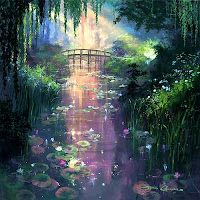 The Fun of role-playing games has to do with that very first day we were given the occasion to play them. It surely varies in tone, feelings and experiences for each and every one of us, but I suspect it always comes down to "wow. I can actually be part of the fantasy world". Some will call it immersion. Others will call it escapism.

I prefer, like others, to call it Enchantment with a capital E.

This "wow" factor of "Yes! This time and forevermore, *I* get to be Jack climbing the beanstalk!"

This has been ignored in game design for some time now in favor of a self-contained, self-contaminated, self-inflicted obsession about the rules and how these rules bring about fairness, choices, support to the fun of the game.

This is my theory, and this is why I think it is valuable to get back to the Lake Geneva campaign as a sort of cartharsis to our own first role-playing experiences. A way to understand why role-playing was so fun in the first place, and how, so that we can make our own games profit from this experience and become more "fun" themselves.

I suspect this post may be quite controversial to some people, and to tell you the truth, this is fully intended. Am I wrong in thinking this way? Then please, tell me so by leaving your comments! Whatever your thoughts may be, I hope you will share them and fuel this conversation. I feel this is part of the reasons why we are all here.
Posted by Benoist at 4:27 PM

Nice to see someone else on the pulpit and me running around beneath it.

Is Monopoly fun? Yes. Why? Because it is easily digested by all, so about everyone can play. Does this mean that it is simple or beneath our attention? Reactions might vary there, but take a close look. Its elegant design betokens strategy and tactics. You have to formulate a plan and stick to it, meet and overcome the challenges of other players (and the board),form limited alliances, manage resources, make deals, and otherwise avoid catastrophe while moving for position and while accumulating hard assets. Any of this sound familiar? And do we call for a more refined set of rules to do it with? No. But I suppose some things might be added, such as a larger board and more utilities and more players and expand here and there, and the Monopoly Society guides to better fun and games (did you subscribe and get the free sucker of your choice?) and of course the Monopoly collector toys and cards and this and that, plus supplement #1,001 Arabian Monopolies, wherein the Guinness Book of World Records indeed exploded under the weight which Atlas could not even handle...

But then again, we want fun, right? Just play the game, then, remembering that some things are immutable and thus better left as is.

Spot on. Interestingly, I was in thought about composing a similar post myself when I came across this. This concept of “Enchantment”, as you put it, does indeed seem to be missing in much of the material recently produced by game companies. Or, rather, it is present (as it must be to at least some small degree or else few would be drawn to play) but neglected or misunderstood by those designing the games. Instead the emphasis has become, as you suggest, rules-orientation.

This, I think, was the greatest failing of 3e: the rules themselves were fine as far as rules go, but the company that produced them never taught their customers how to properly use them. I’m sure most of us remember well the plethora of articles in older Dragon magazines that described how to play this way or that way, depending on what sort of game you wanted to have. If you wanted to play a comical game, then here was an article on how to do it. If you wanted to play a historical simulation game, then there was yet another article suggesting how you might use the rules to achieve the desired effect. In every case the rulebooks remained as they were, but DMs and players alike were actively encouraged to change or reinterpret the rules therein as needed in order to pursue their individual senses of Enchantment.

But with the advent of 3e this all changed. The 1st edition DMG contained clear statements (several of them, actually) that the rules could be altered, fudged, supplemented, or omitted altogether, but no such statement was forthcoming after 2nd edition. Instead, “how to” articles became focused on producing the best character build, the best combination of skills and equipment, or other similar methods of maximizing a character’s combat advantages. Discussions on many blogs and messageboards devolved along a similar vein. Keep in mind I blame this not on the 3e rules themselves – for they can still be used to produce a satisfactory game – but rather on those who designed them. In short, they forgot that the game is about Enchantment.

And this is why so many became upset when 4th edition D&D was announced. It wasn’t simply the arrival of a new set of rules (upsetting as that may have been to some), but rather many simply were not Enchanted with what they saw. The designers designed for a hypothetical, statistical “average gamer” rather than for real people. But the gaming world is simply too big now for any company or design team to expect their every customer to play the same way or to enjoy the same things. Some prefer romantic drama in their play. Some prefer historical simulation. Still others prefer wargame-like tactics and strategy. Different things Enchant different people. No wonder so many were offended when one 4e book dared to state explicitly what is and is not fun!

And so within this concept of Enchantment, I think, lies a warning for any who would hope to shape the roleplaying world: one must not become too dogmatic about what is “right” or “wrong”, “good” or “bad”, “fun” or “not fun”, when it comes to roleplaying games. At the heart of the so-called Old School Revival is freedom, not rules, settings, or anything else. It is the desire to pursue one’s own fantasies unhindered that has sparked the movement, and no game company or rules system should now think to corral all gamers under their own banner. It simply can’t be done.

But I, for one, remain hopeful. As I survey the gaming world (once with an eye toward investment but now with a somewhat paternal affection), I see the concept of Enchantment once more rising to the fore. New games are being published, new ideas are surfacing, and new thoughts are taking shape. Sure, some of the new stuff may not be my cup of tea, but it’s being done all the same. And more than a few of the new players on the field are drawing on the past for their inspiration, renewing the sense of Enchantment that drew us all into gaming in the first place.

Sorry I didn't answer to your comments before.

This, I think, was the greatest failing of 3e: the rules themselves were fine as far as rules go, but the company that produced them never taught their customers how to properly use them.

This, I believe is absolutely spot on. Thought the Third Ed DMG actually does repeat time and time again to make the rules your own and so on, the curtain on the system's subtleties is never lifted. The integration of the system becomes an enemy, and you are not provided with any road map to avoid the pitfalls of system-tempering. While AD&D could take a LOT of abuse that way, Third Ed couldn't by virtue of putting so much emphasis on the clockwork of the rules, and how all the sub-systems, modifiers, conditions etc affected each other.

I remember that during the last half of Third Ed's life people often talked about how high levels were impossible to manage because of how "buffs", modifiers, magic items were hard on the game play, and how so many game elements (spells, magic items, class abilities) became "game breaking". I always answered: "the problem is in your head" while thinking to myself that WotC actually never provided clear guidelines to handle these things in play.

I would have loved to see an "How To Game At High Levels" supplement that would have broken down all the intricacies of the d20 system and would often suggest it to designers. I'm still sad this wasn't taken into account (I love 3rd ed, but for very different reasons that I love O/AD&D).

Same thing can be seen with the infamous Epic Level Handbook. What I wanted out of it was an "How to get Epic Adventures with D&D" handbook, breaking down what "Epic" means, how to put it into play with very high level characters in a Moorcockian way, with the Multiverse, the possibilities, the archetypes and whatever else would have broken the D&D box wide open for the players, but what we go instead was ... rules. The same game play but with 25d6 damage instead of 5d6 on a spell. Hugh?! That, is supposed to be "Epic"? Give me a break!