This quote has been attributed to E. Gary Gygax. I do not know if it truly belongs to him, but I sure see the wisdom in these words.

We’ve been talking for a while now about rules systems and how they stole the thunder of role-playing games. How they have been progressively worked on, refined, and balanced to the detriment of immersion, fantasy and enchantment.

The solution to this death spiral of game design, I believe, is to take a step back and consider the rules as a tool, a mean, and not an end. Rules help bring entertainment at a game table, but they are no substitute to the cooperation and good sense of the people participating around the gaming table. Rules help to support and share the make-believe but don’t replace the imagination of those who end up playing the game.

In game design, I believe one should at all times remember that the game elements offered via products are just that: unfinished, unassembled pieces of a puzzle that will ultimately be pieced together by other people around a game table. 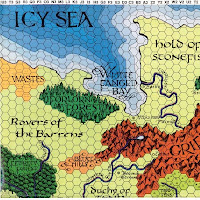 The same goes with game settings. Any world of fantasy presented via sourcebooks is composed of set pieces that aren’t worth anything in game terms until they are brought to life and pieced together at the game table.

If the designer should keep this in mind and make sure these set pieces can be used effectively in a number of different circumstances by a wide variety of users, the user himself should also make sure that the set pieces themselves do not hijack the creative process of role-playing games.

I’m alluding here to the idea of “canon” as it refers to setting materials. To put it simply, the notion that there is a canon to consider when running a game in a particular setting originally designed by someone else is anathema to the raison d’être of role-playing games. If we consider the rules as tools, support for actual role-playing and rulings at the game table, it makes no sense not to consider a published setting any other way. It is a support, a collection of unassembled set pieces which support the backdrop the DM and players use at the game table, but no substitute for the actual process of bringing the setting to life by piecing it together.

This means there is no such thing as “canon” in role-playing games. When a DM peruses through a boxed set searching for ideas and inspiration, he shouldn’t need to consider any of the ideas developed on the paper as more than just ideas. There is nothing sacred in this instance, nothing that would be set in stone, and thus nothing that should or could be considered heresy when the world comes to life at the game table.

Let us start a Greyhawk campaign, for instance. We know that the campaign was run by EGG and Rob in some way. We sure can benefit from the knowledge of how these men managed their games, and came up with this or that element of the backdrop and pieced them together themselves, but it makes no sense to me whatsoever to consider it the right way to play a Greyhawk campaign.

What if I don’t want any Iuz the Evil? What if I want to use the Greyhawk Wars or, God forbid, the Dragonlance Cataclysm components to alter the setting and make it my own? If I discuss it straight and make the changes clear to my gaming partners from the get-go, there can be no objection that this wouldn’t be “the real Greyhawk”.

It is. It is my Greyhawk.

My point here is that role-playing settings are not and should not be evaluated the same way literary settings are. Role-playing game settings are not complete settings in the sense that they only exist when they are actually put into play. Using a setting under the assumption that it has to be played in a particular way described by this or that sourcebook or boxed set is in essence committing the same mistake as assuming the rules have to be played as written.

There isn't, and shouldn’t be, any such thing as “canon” regarding role-playing game settings outside of a theoretical discussion of written sources, but even then, it should be clear that the written material alone is not alive. It is not yet used as it was designed to be used: at a game table, with real people, real needs and wants, real imaginations.

To quote the old-schooler: imagine the hell out of it! Don’t shackle yourselves to game materials written by others. You have to trust in your good sense, your wits and imagination to make the game world come alive. If it contradicts some clause of the written product, so be it! Your game will be all the better for it.
Posted by Benoist at 11:18 AM

Yep! Thanks Benoist it made interesting reading.Have I mentioned I really love this blog?