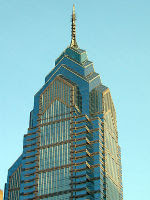 So it's a miserable week, but it's over. I get out of work early and get a free moment in downtown Philadelphia, and there's a small, but fancy store in one of the more obnoxious 'shopping venues' in the city. The store is amazing, but primarily sells jewelry with a mix of art of sculpture. The shops are kind of a mini-mall, and like any mall experience, it's great for people watching, but rarely attracts great people to watch. I like to window shop, looking for special things for my other half. I love the art and sculptures, but know I'll probably never be able to afford any of it without divine intervention.

As I'm walking around, I hear piano playing.

The entire 'mall' is basically built around a circular, very open area. I like the playing so much I break out my bottle of water and sit at a nearby table overlooking the open, central area.

There's a young guy there at the piano, and he's doing it. What's impressive isn't how well he's playing or what he's playing, but that it looks effortless. Just beautiful music... pouring out of that piano and filling every inch of the entire mall. He has his baseball hat open on the piano and there's already a couple of bucks in it. The clean, sanitized, phony as hell mall atmosphere is shattered... real life is spreading throughout the space. Watching people go by, everyone notices the same thing... it's as if the season of Spring is talking to everyone.

While he plays, I notice just a subtle shift in the background sounds of people chattering away and eating their afternoon snack... as if the music is giving them an excuse to actually stop talking and enjoy the flavors in front of them.

A somewhat crazy looking lady suddenly asks me, 'do you think that's appropriate?'

She points to two teenagers who, in full view of a lot of people, are basically making out right there at their table.

I really just want the crazy lady to get away from me. I understand public discretion, but this lady apparently hasn't stepped out into a warm summer rain in many years, has forgotten how wonderful youth really is, and ought to be thanking the gods that the young still respond to music that occurs in real time. Instead, she picks the creepiest looking stranger in the mall, myself, and just starts talking... go figure.

'I'm just listening to the music, m'am', I tell her. She wanders off. Good riddance.

I continue to watch the piano man. This guy's like an H.P. Lovecraft character. There's something... infectious in what he's playing. It's not quite like the scene in Shawshank Redemption, when Andy puts on the opera record, but the crowd is reacting without really being aware of it.

The reason I post this is the actual location where this all took place. You see, the floor of the ground level is a series of concentric circles. A decorative, sort-of-radial pattern of cut marble slabs turns the floor into a strange mosaic. I found a picture of the floor here... just imagine that the piano is where the Christmas tree is. So inside a circle inside a circle there's this amazing source of this amazing music.

Above the whole thing is a pretty impressive, but awfully mechanical looking cupola... a picture is here.  The center is directly above the point where the piano was located. So you have marble from a couple of different places on the planet. Steel, with its own bloody and majestic history. The baked sand of the glass. A few thousand years of glassblowing, metallurgy, architecture, masonry, design, symbolism... and, of course, the piano with its own delicate mathematics vibrating the air to a specific set of patterns.

Overhead, a fast moving but gentle set of storm clouds blew by.

Eventually, of course, the security guard comes over and a few minutes later the guy hurriedly leaves, taking his bounty with him. All in all, he probably made about twelve bucks in half an hour... not a bad rate of pay. You would think that the mall ownership would encourage a musician to come in and play, but they don't.

As I left the structure, a slight rain fell. I thought about all those patterns focusing on one point where, today, some guy wanted to make a few bucks to buy himself a snack playing the piano. Patterns of metal, stone, even air. Glass and steel 'suspended in the sky' while patterns of carved marble lay beneath. All focusing to a center where a well played instrument sat just at the moment when a small storm went by overhead.

It's easy to believe that, even in this place and time, little bits of magic somehow bleed through whatever controlled and measured world we have created. These slivers of magic are small, subtle, and quick. You have to be still and quiet or you'll scare them off, or worse yet, miss them completely.
Posted by scottsz at 10:02 PM

Ah, how I miss working in the center city area...

I used to pop into Liberty Place quite frequently during my lunch hour. It can be quite zen-ful.

I had mapped it out quite extensively years ago when it was first built and it was an interesting hotspot for a few Super Hero RPG encounters. It didn't look so zen-ful afterwards...darn villains! ;)

Philadelphia's definitely still a strange place. Unfortunately, many of the 'freaks and geeks' have been priced out by the graduate students and New Yorkers in the downtown area.

Nice stuff. I suspect, ironically enough, she was flirting with you.

@Scott: I didn't think of it, but it would be ironically funny for an old woman to throw a 'rant' at me at a moment like that.

Is that the old Bourse building??

I was playing jazz gig once upon a time when our Julliard-trained pianist launched into an incredibly luscious rendition of "chopsticks". Yes, chopsticks. As the rest of the band picked up the musical thread I looked up to see the waitstaff dancing to the music, as one waitress pirouetted gracefully ... it was like she was dancing on air.

That image lingers with me after all these years. It was a moment that sounds very much like the one in your post.

@grodog: The pics are from Liberty Place - not my favorite building by any stretch. I can't stand the 'reflective angular jagged' look - I prefer a lot of the older Philadelphia buildings with cupolas and moldings...

@DuBeers: Yes! There's sometimes that 'spontaneous contagion' of music. I'm not a trained musician or music historian, but there's probably a better phrase for what you are talking about. It just kind of... happens.

Thank you both for commenting.

scottsz,
I work in Center City! I actually did renderings for an interior design at 1 Liberty Place.
Small world.

I love what you wrote. You have a powerful message. That last paragraph especially means a lot.

I love your description "slivers of magic." Indeed, we must be "present" in order to experience these. In today's world it is a rare gift to experience this "magic." Magic is in the silence: silence of the mind.... to achieve that in an urban area is quite an accomplishment.

@Journalizer: Happy to see you here!

I love your point about 'silence of the mind'... as if music can 'tune' us.

...makes me wonder about the quote about architecture being 'frozen music'.

As if there is some secret hierarchy of patterns that serves as a set of keys. All that accumulated information aligning like the planets in the sky.