I lifted this from the KingofPain on the Acaeum as he was a participant in round 2 of the adventure.  Thanks John!  Hope your brain came back to normal!  :)
As the adventure grew in the design process I dropped the idea of using the DS set for maps and drew new ones.
Alan Silcock played as well and said:  "then sat night saw me in Robs game, with the gang. this was also a tremendous adventure. we all kinda get lulled into the same kind of adventures all the time and it was a joy to play something that was quite frankly, totally out there!!! it was REALLY different from the norm and three hours of killing my brain trying to figure things out, totally fried me, but i enjoyed it immensely

despite the fact that the one monster that we encountered, i think had a death-wish on me, cos it hit me with pretty much everything in the arsenal and also the kitchen sink - personally, i would love to see more adventures like this - so a huge pat on the back for Rob, for coming out with something like this and pulling it off very well - thankyou Rob!"
Thanks to all for putting up with my deranged mind and game designs...  :)
"Saturday night in the "Dungeon of Death" with Rob Kuntz.  This was easily the most difficult game I played during the convention.  I think my brain was still bleeding this morning.  Not a hack-and-slash at all....not even a dungeon in the classic sense.  More like an interdimensional nightmare with an alien physics professor.  It was a lot of fun. " (KingofPain) 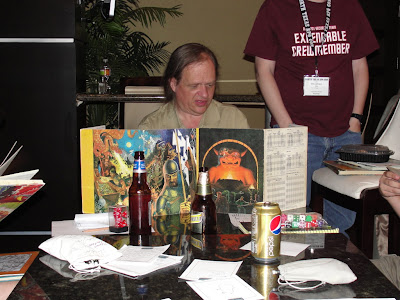 "Cimmerian, Killjoy32, LucyJoyce, and Smarmy1 in the "Dungeon of Death". " 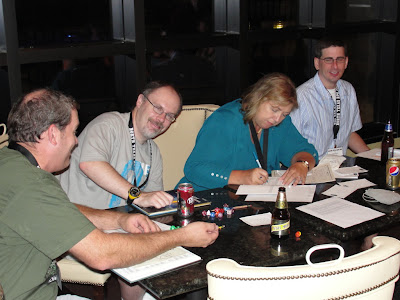 "Rob and Smarmy1 interacting during the prologue in the asylum." 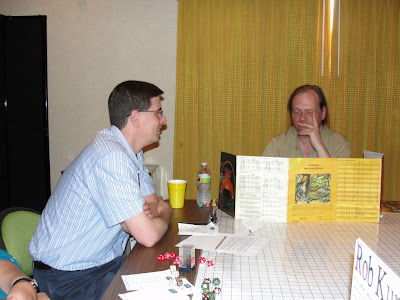 Next Up... Kyrinn Eis and her world of Urutsk (a hands down winner) that I played in all four days of the con...
Posted by Rob Kuntz at 9:02 PM

As the adventure grew in the design process I dropped the idea of using the DS set for maps and drew new ones.
Ah, I knew that would probably happen. Admittedly, I was curious to hear how you may have used them as given, but you're just too crafty for that, aren't you?

Alan Silcock: "it was REALLY different from the norm and three hours of killing my brain trying to figure things out, totally fried me, but i enjoyed it immensely"

KingofPain: "I think my brain was still bleeding this morning. Not a hack-and-slash at all....not even a dungeon in the classic sense. More like an interdimensional nightmare with an alien physics professor."

I love hearing about games that words just can't describe fully. It was THAT cerebrally challenging, eh? Now THAT's what we need more of.

These descriptions and pics are so cool!!! Thank you for sharing!

Yeah. It was crazy good for sure. The players were stumped in a good way and strained the ole brains, some I feel at a level they'd never experienced before.

GW: Yep! We definitely need more of these types of adventures in my opinion and as also voiced by many of the participants.

That's the problem with Rob....
He wont roll over and let the OSR crowd take over.

Why he thinks he can keep pushing the boundaries of game story design to this day is pure arrogance.

I figured Rob was going to bend the statis quo and even prepared for it. I knew my attributes & those free magic items were going to do little good. Didn't matter, I still couldn't solve the puzzle.

I played a cleric and of the few useful spells I had that I thought might be of use I was wary of casting thinking that Rob would mutate them and give us a confusing result that would lead us further astray. I never used Detect Magic..it was obviously already there. I tried to plane shift a real tough bbeg but of course I failed my roll to touch.

Guess what? Being up against it is fun...I am sure Rob was getting bored watching us fumble around for so long and I honestly believe the start being in the loud room cast us on a wrong path. As the game went on in the lobby I realized some things I misunderstood from the start.

In any event, I would still like to delve further into this one as the ties to normality being cut sent the players reeling into 'play time' territory. Finding our adult problem solving methods about as dexterous as a supertanker, we were forced to unlock that child like quality of our imaginations where adult reason shuts down at failure and childhood persistence floats along care free exhausting the most fantastic.

Use the force luke!

Once we let physics die we seemed to start on the path of discovery.

So yeah..it was slow..probably painful for Rob to watch but we were having fun. It's actually a little bit of a bother now cause I am sure we would all like to know more about what was going on.

Great to be at your table again.

Thanks Chris, a very good general summary. Mike B. relocated us ultra-fast out of the "loud" area and to the lobby, where we could hear each other without standing 2 feet away and then information was flowing smoothly then. Lots of little descriptive hints that as a whole formed the nucleus of understanding, and thus eventually dealing with, the hostile/mysterious environment. The party was hanging on every word, sometimes too long, unfortunately. But that's what one does when faced with a mystery... I have appended the player handout given to every participant in both rounds. Good playing with you again, as well as with Jason Cone, Allan, Alan S, John Lile, Brian Kawano, Joan, Smarmy and all the others!

You have been directed by the Guild of Wizards to retrieve the bodies of three of its members who disappeared in the depths of what they refer to as Castle Perilous, or which is otherwise known by locals as the DUNGEON of DEATH.

These three mages, Norimbu of Ambrusia, Carsh of the Four Eyes and Paryck the Cagey, disappeared months ago while investigating its depths for the guild. Their mission was to retrieve information on the castle's magical source. What is known is explained to you as follows. Several years ago a meteorite impacted the area many miles north of here. Out of this arose a great mist and fire, which consumed the lands for hundreds of miles about the area. After several weeks of this burning manifestation, the mists receded to what is thought to be the central impact area. Investigations by various powerful organizations and persons revealed a muniment of grand size, apparently builded atop, or part of, the meteorite or adjacent lands, the latter being almost unscalable, rock-effaced cliffs.

The area about the core edifice, and for an indefinite, amorphous distance proceeding out from it for what is thought to be at least a 100 mile circumference, is impassable due to its now poisonous nature. The very air is a poisonous haze and nothing living (at least in a natural way) now abides there.

Due to this extreme condition, the guild mages will teleport your party into the same area that the 3 mages took, the whole act being triangulated via scrying and communing methods. Due to the utter instability of the region it is thought that some centric magic may be compromised or altered. It is not known what dangers are present within the edifice, but certainly there must be many of them and strange, possibly even alien to this planet. The guild recommends that you take a wide variety of spells which include those that would aid in ascertaining and dealing with the malevolent environment.

The Mission Specifics: Each party member receives a special necklace of adaptation which they may keep. These will allow the breathing of the highly toxic fumes comprising the area. These also grant a +2 save to all know poisons. For successfully completing the mission and returning the remains of the three mages, each party member will be granted a favor by the guild, each favor to be granted upon request at any future time or date.

Everyone had a positive reaction to the Dungeon, which of course (if you know Rob) is a tongue in cheek play on words as it was no cardboard cutout dungeon in any sort of classical sense!