How It Came into Being
I will take full blame for the initial award idea.  Very soon after returning home from NTRPGCon #1 I contacted Doug Rhea and suggested this, then drew three roughs for him to look at. In between I roughed out the award process and we discussed the preliminary rules by phone and email. A furious email exchange soon ensued between us where the idea started to take firmer root.  The initial plan was a very intricately designed plaque, but as it turns out, Doug was bitten by the scope and immensity of the idea, which is to award "The VERY Best" in RPG design. He now suggested that it be a 3D sculpture.   I, of course, stood back, not wanting to suggest expenditures which were not coming out of my own coffers.  No worry there, quoth Douglas!  So, in pictures, this is how it took shape:
Step 1) I commissioned Andrew Taylor (ATOM) to give us standard views of the three castles used in D&D's play-test,1972-1973:  Blackmoor, Greyhawk and El Raja Key.  Andy produced the following concept sketches from my detailed notes, all of which were splendid and accepted. 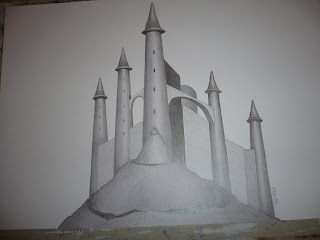 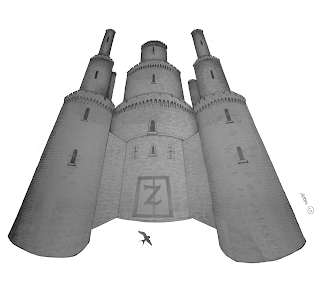 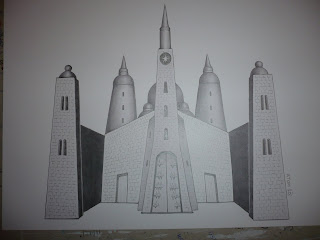 Step 2) I introduced Lauren Hawkins to Doug after David LaForce (Diesel) who Doug had originally contacted could not go forward with the design or the sculpt due to other concerns. Lauren (Journalizer from this blog) stepped firmly in with her 3D rendering mastery to craft the final composite design based on Andy's full-blown sketches, and from many angles.  There ensued another furious email exchange between Lauren, Doug and myself wherein we nailed down many specifics about the final design. 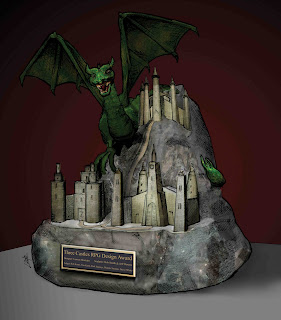 Step 3)  Doug passed  along Lauren's excellent finished design and many perspective sketches to the sculptor at Awardsideas.com.  The sculpting process was now in full gear. 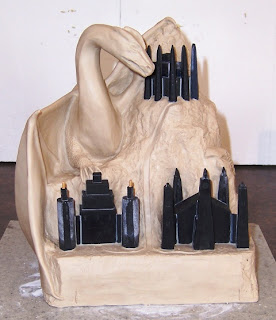 Step 4)  Finish.  About a month before the convention and after 10 months of work in various forms from my initial ideas and drawings.  Doug and I, Andy and Lauren and the sculptor are all proud of it!  It's possibly one of the most expensive awards ever rendered for our industry and certainly each of these is a piece of art that any deserving RPG designer would be proud to have on their shelf. 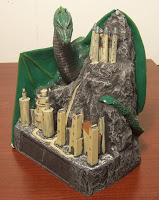 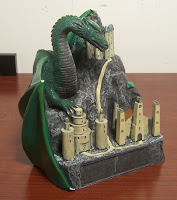 The 3C Award:  What it Is and What it Isn't...
This award is for true excellence in RPG design.  The criteria for winning is very demanding. There will be only one award given per year so the competition could be very tough,  However, the judges can rule that no submission equals the rules standards and thus a year could have no winner.  This is not a placebo (or best of what has been submitted) award, as I noted at the convention introduction to the award where Doug and I spoke about it.  There will be several stages which pare down the entrants, and if by the final round none have met the criteria, no award will be issued that year.  As Vice-Chairman of the 3C Award Steering Committee, the process I am drafting for the adjudicators is both stringent but refined.  The competition is not only among the entrants. More importantly, each submission will be eyed for raising the bar when compared to past designs of excellence in our industry.
NTRPGCon co-founder and Chairman of the 3C Award Steering Committee, Doug Rhea, will receive RPG submissions for 2011 between Oct 01 and Dec 31.  News on submission and closure dates will be posted on the NTRPGCON site very soon along with full submission guidelines.
Year 2011's 3C Award judges have roughly 200 years of game design and other far-ranging industry experience between them.  Many of the judges have been nominated for, or won, awards for work in our industry.  Their work as a whole has been noted for excellence and/or for raising the bar in game design or interrelated areas.  They are:  Dennis Sustare, Paul Jaquays, Steven J. Winter, Tim Kask and Robert J. Kuntz.
Enjoy the news and be looking for more updates here and at NTRPGCON.com ! 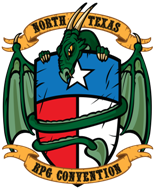 Thanks for the info about the award, Rob. When will details about the submission process be available (like does the book have to have been released in the previous calendar year or somesuch; or, are only rules set eligible to win, or do sourcebooks, adventures, minis, etc. fit the bill too?). Will you also name some exemplary rpg designs as models so that folks will at least have a sense that they're in the same league as what the criteria seek?

Most all of what I would say will be answered very soon and downloadable from NTRPGCON's site. Be looking here and there for updates as I noted.

The award will cover all manner of printed/published RPG material, excluding miniatures and magazines.

As far as criteria of what is a good game, a trendsetting game, if YOU don't know by now what makes the cut and what doesn't merely imitate, I can't help there. Of course some arbitrary tastes figure into any ruling, but I am covering that instance as well. Think of how D&D was unique to the wargames industry and how your own fave board game (Settlers of Catan) made impacts and was so well received and you have a partial clue. I would suggest that folks go back some and start researching game history, like that connected with the CRA (Origins Award) or even the Strategists Club Awards. Otherwise we may note some fast examples in passing, but again, if designers do not know what a good design is, what makes a game fun, playable and different, then they are not designers, really, and should go back to square one perhaps and start studying what has made the winners win in this industry. It is not up to the committee to guide new designs and their processes, only to adjudicate them.

As part of the NTRPG Con Committee, I am so very excited and proud of this award! I also like the idea of "no award" being an option if the submissions in a given year do not include any that truly exemplify the qualities we have adjucated as being most representative of excellence in game design. Too often awards are given for people merely showing up; this award will strive for something a little more meaningful!

Rob's idea was a great suggestion both for the industry and game design; Doug's willingness to go above and beyond in the award design (the initial sculpture was revealed at NTRPG Con 2010 and is absolutely a beautiful piece of art!) was a classy move on his part. I'm glad to just be along for the ride with the fine gentlemen who are involved in this award. I hope that someday the Three Castles award is a highly sought after and coveted piece of RPG history, I know with such a respected group on board for the first judging committee whoever wins will be able to have something to boast about in the company of other gamers and designers.

Impressive.
An award that may not even be awarded if nothing reaches its criteria. Most impressive. A real symbol of excellence. Sort of a knighthood from the queen? Of course those can be cancelled or anulled. I can't wait to see what makes the grade.

OT: Thanks for a glimpse of the ol' grey castle. I thought it was more of a symbolic reference, but when you said concept sketches from my detailed notes, I suppose it was more than that.

Wow, this is pretty cool.

Speaking of Castle Greyhawk, did you recieve my e-mail message regarding you're blog post of Saturday, January 2, 2010? I am very much interested in getting out the information about Castle Greyhawk, if not on Wikipedia, then at least on the Greyhawk Wiki, or Canonfire.

@Badmike: Could not have said better myself, Mike. Without NTRPGCon there would be no gathering ground for this as well. Thank you!

@GW (and his Darth Vader routine, lol!) America for too long time has flattened much into sameness. The Dave Hickey re-quote of President James Madison always resonates: "Genius is an accident; mediocrity is a fact." And it's a very good thing indeed that there have been many "accidental geniuses" in the game design field. The search continues for more with the 3C Award. Time for everyone to show their roots and strut their stuff, so to speak.

@Lord Zack: I apologize, but if I received the communication I cannot find it now. Was that in reference to updating the Wiki article history upon it to actual fact rather than it present fictional form?

Rob!!
I loved reading your story-telling about the development of this trophy. It is a work of art and I am SO honored to be a part of it!
I have encountered game developers in the blogosphere whose effort, imagination and dedication to their game is of the highest caliber. I think this will be a tough job for the judges but I look forward to reading about it on the NTRPGCON site.
Oh yeah, and Rob... Thanks for the birthday gift. You posted this on my birthday and I read it that night!!!

Your dynamic entry and professional courtesies secured for us further momentum with this long project and set the pace for the sculpt's ultimate construction. It was a joy working "alongside" you and watching you master it all so quickly. :)

@LotGD: "Acting!" Thank you, Rob. I am often guilty of forgery, always amalgamating things to make something new. If I could only turn that desire & energy into creating...

@Journalizer: Let me add another compliment to your great sculpt. It is magnificent!

I must go quickly now, as I am awaiting the arrival of my mentor and acting teacher, the great Baudelaire. Today's lesson is costumes. Knowing Baudelaire, he will come over and try to fool me in some silly disguise.

GW: "Baudelaire... will come over and try to fool me in some silly disguise."

Run away if he attempts to dress you out as a "Pansy
de mal." :)

Hmm. Your :"nightmare" (if I read the picture correctly) _could be_ similar to those who have the "gazelle-unicorn cross" affliction, wherein because of their too-too, they "Do-Little"... ;)

Sometimes, "too-too" little...
...and they don't give awards for THAT! Although if they did, something with shiny unicorns & gazelles would look just fab!

Thanks for the follow-up Rob. I guess I was trying to ask about whether you're looking for original game systems designs (i.e., new RPGs, new wargames, new boardgames, new card games, etc.) vs. new RPG designs (supplements, sourcebooks, adventures, settings, etc.). It sounds like you're leaning toward the former vs. the latter, but I'll wait to see what you and the gang post as guidelines before I worry too much about what's viable :D

Hi Gro! It's an RPG award, and I believe that says it all.
Original Settings, game systems, adventures, supplements source books, etc. No magazines, computer games, minis. Essentially, nothing is included that isn't published (with the exception of magazines).

Thanks for the clarification, and enjoy the rest of your weekend :D

@ Lord of the Green Dragons: Yes

very awesome idea, rob! im a little ashamed to ask, but if you dont mind answering it, i would like to ask wich castle is the el raja key.

Hi Rafael: In order of historical occurrence, the 3Cs are (top to bottom): Blackmoor, Greyhawk, El Raja Key. These are representations only based on my experience and/or other media renditions and descriptions that have proceeded the matter.

@ Lord Zack: The idea has great merit although I currently have no extra time for updating it. Some of the information will occur in future product releases. I will add that my Greyhawk days have pretty much wound down and my interests have solidly shifted to multi-dimensional routes these days and outside of plans to publish my original castle levels I am stepping petty sparsely in that direction, now 38 years tread upon.