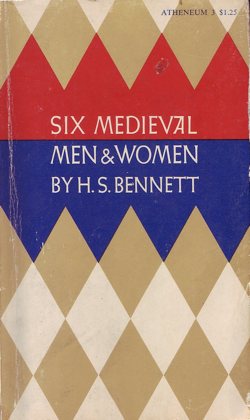 Old School 'D&D' and games carrying on its spirit are really about characters. How they live. How they die. What principles make a brash wizard or a humble fighter go into the dark? Fortune? Glory? The challenge of fighting evil?

Given these questions, which each player and DM answers in their own way, a perennial 'discussion' bounces around the Internet about a character's 'endgame'. What happens when fortune and glory are earned by a character over a course of time?

H.S. Bennett's book, Six Medieval Men & Women, can offer DM's and players some simple and accessible ideas on fleshing out the active life of a hero or heroine and basic treatments for campaign life beyond the dungeon. The book casts a light on the following lives from history (linked below to their Wikipedia articles):

It's fair to say that much of fantasy's symbolic language is drawn from medieval Europe, particularly the original World of Greyhawk setting materials and modules which I drone on and on about. From the Greyhawk/Gygaxian corner of fantasy worlds, the personages above and the lives they lead can be particularly inspirational. As the DM is the players true 'link' to the campaign world - not the dice - the way that historical characters interact with the world around them is particularly valuable and should be studied by everyone.

From the book's text on its subjects, a DM can take away much insight:

Those who can get their hands on this book will not suffer through a dry text - the chapters aren't very long and are taken from a series of lectures. A certain 'condensation' of life is presented and each chapter reads very smoothly and quickly.