NTRPGCON was whopping good time, and I actually got to play this year, and not only play, but play in Timeshadow's World of Urutsk.
In fact I forgot how many times we sat down to play (3?) as the setting, her GMing, the whole was so engrossing that one soon lost track of the days and time spent.
Not many settings inspire me to play in them.  In the day, Empire of the Petal Throne did that, so did Dave Sutherland's game when he DMed, which was not often.  Of course there were old standby campaigns in LG, then, but many were dungeon-based.  You never got a chance to let loose and explore the ranges within these latter game settings which operated within a vacuum when compared to the latter two I mentioned. That of course was because one had to envision a world and make the parts fit together in such a way to allow players then to do so.  Kyrinn's Urutsk filled that need and then some and I found myself hooked and wanting to come back every day to continue journeying in the imaginative fields she'd let her players loose upon.
Gary Gygax and I had no limitations to what players could do, where they could go, how many could do it, or what time it took for them to do whatever it was they were doing. There were also no immediate IF and WHEN comparisons to others in the campaign stream.  This created free reign gaming for all participants, didn't lock them down to experiencing only one-sided group adventures and allowed for a no-holds-barred approach to not only playing but through this allowed he and I grand opportunities to constantly develop new game-world matter on the fly.  Kyrinn has the same approach--no restraints.  It was a breath of very fresh air.
When Gary Gygax began DMing participants in Greyhawk they soon grew to be a higher level than the new participants who later entered the fray.  This made adventuring with the two disparate groups near impossible for level-comparison reasons. The campaign game end of our game was already in gear then for our higher level PCs.  All we had to do was to manage the different player-participants through time-tracking, which we always fudged to get them joined up again if that need ever arose.  In other words, it was a given that many different adventures by different groups in different locals were indeed taking place and often at different times.  Kyrinn's world smack's heavily of this nuanced way of playing.  As a result, the challenge is to keep thinking and moving forward for both the player and the GM, and she not only portrayed a willingness to do this, but an imagination that could fill in and expand upon the threads of an already colorful tapestry and in doing so fulfill the imaginative expectations of her players.
The ability to expand upon these micro or macro game-planes at all times and at all levels is the mark of a great GM and a great story-teller, and she is both.  These in combination also act as a personal gauge for measuring the level of expectation that GMs exact from their creative wellsprings, and in this regard she excelled as well.  In all she ranked up there on the "Best GMs List".  Her world, her rules and her style were all mirrors of a consistency fed by a caring, concerned and dedicated designer.  Urutsk is a winner because of this.
Certainly it is true that a good GM can carry the day even with a spare tire and in the dullest of moments expected by others, still make those moments shine and the wheels turn as if they were ready-made for that very moment.  In my opinion this is a testimony to the designer and not an excuse to use for determining the opposite by those looking askance upon such matter.  Where the rubber meets the road, as they say, is where we start our journey, whether in playing or GMing.  Where dedication and imagination meet is where we find our gems of the game industry.  I was lucky to play in such a gem, and to be GMed by such a gem of a person, for three days in Texas. 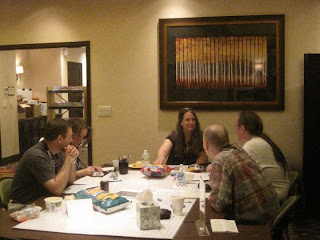 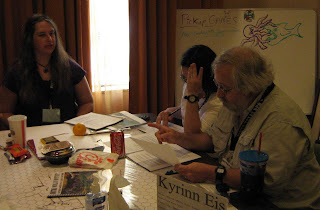 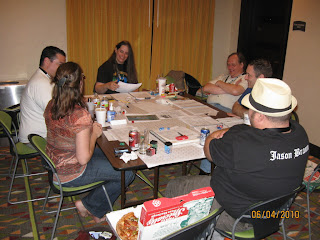 Photos courtesy of Allan Grohe and Brian Kawano (and if I missed someone, sorry, but thanks!)

NEXT UP:  The THREE CASTLES AWARD and what it is and how it came to be...

Link to Timeshadow's Play Report from the CON
Posted by Rob Kuntz at 12:40 AM

Rob told me how much fun he was having in Timeshadow's World of Urutsk but I already had pinned myself during registration of events before the con.

Kyrinn was in that group of people I didn't get to talk with for very long at the con. Cannot seem to leave the con without a regret.

I was glad to get a copy of the game though and perhaps next year I'll get to play.

I picked up a copy as well, Chris, and Urutsk looks like a pretty interesting setting---a melange of SF and traditional fantasy with some surprisingly hard-SF elements thrown in to boot: Rob mentioned something like a monofilament wire trap that appeared during the game, and the book mentions shifts in planetary axial tilt, among other things!

My hat is off to you, Timeshadows. Your gaming is something surely to aspire to. I haven't heard of your World of Urutsk before, but I will definitely be checking it out now.

Hey GW: I have appended in this main article, at the bottom, a link to Timeshadow's play report from the con. Worth checking out. I might add some more specifics as I finish my updates here.

Rob: Thank you for your lovely review, and the praise you give me.
--The truth is that I was influenced to a great degree by Gary's writing in the 1E DMG, which I read from cover to cover at least once in my youth, and applied it to Gamma World. It seems that the good advice found purchase in the soil of my mind/heart, and I was able to form something 'new' out if it.
---Once again, it is those that preceded me that are most to thank, you included.
-----Just the same, it is very gratifying to reap a degree of reward from the hard work I've lovingly put into this setting and project. Things are looking up in this regard. :D

Chris, Allan, GW: I'd love to game with you guys when next we meet.
--Please let me know what you think of the pre-release book, and I hope that it is enjoyable. :)

You deserve what I said and a few plate-fulls more. Keep going. Of course "Things are looking up in this regard," as you never had any doubt, heh? :)

So many photos, including the recent ones by Amanda. I believe that your sessions were photographed from every angle and direction except via satellite. ;)

Talk with you soon.

Reaction to Kyrinn's setting was pretty much 100% positive. What struck me about the setting and rules when I first read them was how original the entire concept was...something I find irresistible in gaming! I think the way Kyrinn and Urutsk was able to bring in both experienced and new players at the same table is a big plus!

Wow, awesome as hell. Wish this stuff with bloggers I liked happened closer to So Cal so I could meet some of you folk! Rock on.

It can! Come to SoCal mini Con III!

Hey Brunomac. Well. Texas isn't that far from you, and as noted, Cimmerian from Cal makes it there every year, as well as a few from out of the country (Canada and UK). I'd take Cimmerian up on his offer if you aren't traveling too far from home base, as he's a blast to game with. :) Thanks!