As many of you might be aware, I auctioned a huge portion of my mss., art, game material many years ago.  Those auctions were conducted by Paul Stormberg of the Collector's Trove.  Here's the link to his page; and what follows is his grouped summary description of my auctioned items, with the original picture and notes of my Bottle City adventure (later to be published by PPP with great editing work by Allan Grohe).  There is a lot of information on Paul's page worthy of noting if you are at all interested in the history of that era.

Rob Kuntz is one of the original players of Dungeons & Dragons and helped to shape the design of that game through clever play and eventually writing and designing. Rob served as co-DM with Gary Gygax in the famous Greyhawk Castle campaign in the early to late 1970's. His character Robilar a number of near-mythological feats in the Greyhawk campaign, many of which are the subject of everyday conversation of gamers all over the world. Highlight's of Rob's many contributions to game and RPG design and writing included: King & Things (a Charles Roberts award winner), WG5 Mordenkainen's Fantastic Adventure, The Maze of Zayene, Garden of the Plantmaster, Sir Robilar's City of Brass, WG8 The fate of Istus, Dark Druids, Dark Chateau, CAS1 Cairn of the Skeleton King, CAS2 Tower of Blood, The Bottle City, Lake Geneva Castle Campaign: The Living Room, and more! His collection for auction was simply fantastic. It contained nearly everything imaginable, from the earliest relics of the pre-D&D days, to artwork, to manuscripts, to letters and contracts, to fiction mss., to original El Raja Key and Castle Greyhawk dungeon levels, and many more items that are too numerous to list here. In total the Robert J. Kuntz auctions reached nearly $33,000! The auctions garnered so much attention from collectors and fans that they received mention in SCRYE magazine (No. 86, pg. 10). The highlight of these auctions was the Bottle City level of Greyhawk Castle by Rob Kuntz. This 17" x 22" map and eight pages of level notes sold for $3,650!" 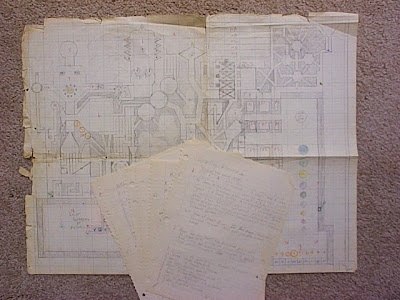 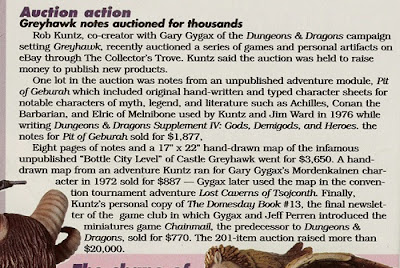 I make specific mention of this because Black Blade Publishing and I are seriously examining ways of getting the scans of these and other items onto a DVD and even making some matter available in print.  I have my take on it and so does Allan, who is in control of the project on the BB end.  Sooner or later we will asking the fans, by way of sampling the descriptions of the content, just what they feel is of weighted interest.
Posted by Rob Kuntz at 9:06 PM

Readying to light a ten-by-ten foot box of fireworks

Oh, waitaminute. I forgot to win the powerball lottery it would take for the price of such a treasure. Dagnabbit!

Can't wait to see how this develops...

Well, OK. But Grendlewulf, seriously. There is no need to see several contracts with TSR or EGG and such, right?

And there is some material like a page here or there that isn't, in my estimation, of very much worth content-wise.

What I am suggesting is getting the gist amongst the relatively important material what hits or misses a mark. Like rating it, so that a curve can be established and used as a guide for not only ordering the matter, but for what parts within it we feel need added attention or elucidation.

That's great that people were willing to pay so much for this stuff. It also confirms my belief that many people are insane ;).

@ Dan: I suppose. To me, people driving around (and investing in) these really expensive vehicles is insane. But I guess if you have it, use it.

The buyers have nothing but my undying gratitude; and that Paul and Martin Wright (a good friend, RIP Martin), were savvy enough to see to these items preservation through scanning them was a HUGE plus, too.

@ LotGD: Yes, nor do we need to see copies of receipts for business expenses, lunches, etc. Somne minutia is just so... minute. ;)

@ Dan: I'd have been bidding too, if I was aware of it at the time. Viva L'Insanity. Give it a chance.

san-i-ty. n.
1. The quality or condition of being sane; soundness of mind.
2. Soundness of judgment or reason.

Is being in sanity really so bad?

I agree that the general community might not be interested in, say, a receipt to a pizza parlor, I do think such items would assist researching the conditions of early game publishing and TSR.

Like how the streetlights seen by George Lucas' team inspired the shape of the Slave 1...

One of the most revealing pictures of Apple's design team shows them in a plain meeting room with a large work table - not a computer or device in sight.

@ Gredlewulf: I never saved those. A few receipts for printing, photocopying or such. Yes. You would have been one of the "insane" ones during the auctions, I can tell. :)

@Scottz: Halo... Conditions at TSR, I feel, are better extracted from the files that Ryan Dancy and folks came into possession of when the 1st-wave WotC took control. Unfortunately, and a long time before then, a lot of TSR original art was purged, ordered thrown out by those in charge then, so much of the media history that wasn't salvaged in the resulting chaos was in fact destroyed--literally thousands of paintings and sketches from what I understand.

My collection is more reminiscent of the creative phases that a free-lancer and one of the first DMs went through then. Without commentary and contextual matter, I don't feel that items outside of the creative element that was so ongoing then would be of much use or interest. There are some unusual relics, however, such as my partnership agreement with EGG, etc.

My main interest, however, lies in the many maps, notes and mss extant.

I know this is an odd idea to suggest or heck it may be a great idea!, who knows. Anywho an idea popped into my head after seeing a concept that is soon to be released. Which is a scrapbook of the Sierra company that used to make the fun adventure games. With original artwork, commentary, designs... etc.. A D&D based coffee table book with the same concept would be a great idea. It would be a fun way to preserve a bit of history and for fans new and old to get their hands on some rare materials. Heck I would be flipping through that very often while sipping away at a coffee with a dash of hazelnut cream. Looking forward to your future publications.

It's not a bad idea, in fact it has a lot of merit, Delve, I'm just not sure if it's practical given the mass of material involved.

Presenting it as a fun experience for the reader would grab peoples attention. Having fold out maps, notes with coffee stains, sketchings, photos, displays designs fond memories, etc.. A biography on D&D that is not gaming material but about the game and the creators. I think that would be enough as an outline and there would be a world wide interest for such a publication.

I understand. But what you are suggesting--and I have thought about something similar to this--the fold out maps, the hard-bound extra-large book, glossy photo-quality paper stock, inset color, intricate design and packaging--all of this costs A LOT of money to produce. Almost all small publishers could not afford the print costs, no matter the volume printed, even with digital. This would have to be put together as a spec project to sold upstream to a specialty mid- or larger publishing house. There's a lot of hurdles involved with large, integrated projects like this, it's not all ART-HAUS.

An important thing to remember is that the things you think are not worth while, tend to be the very things history finds most valuable. It's simple really: If most people would tend to agree with your assessment of worth of, say, pizza receipts, and thus dispose of those things, this will naturally lead to far fewer data points on the cultural preferences for pizza, which toppings, etc., and thus a cache of those receipts can be nearly priceless to the right researcher.

The minutia lends itself to explaining the subtleties.

I say include anything you are not legally barred from.