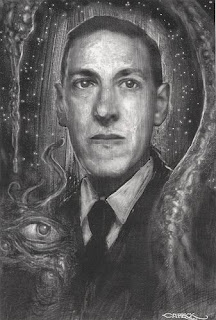 My opinion of my whole experience varies from time to time. In broad daylight, and at most seasons I am apt to think the greater part of it a mere dream; but sometimes in the autumn, about two in the morning when winds and animals howl dismally, there comes from inconceivable depths below a damnable suggestions of rhythmical throbbing ... and I feel that the transition of Juan Romero was a terrible one indeed.
The Transition of Juan Romero
Men of broader intellect know that there is no sharp distinction betwixt the real and the unreal...
The Tomb
I have dwelt ever in realms apart from the visible world; spending my youth and adolescence in ancient and little-known books, and in roaming the fields and groves of the region near my ancestral home. I do not think that what I read in these books or saw in these fields and groves was exactly what other boys read and saw there; but of this I must say little, since detailed speech would but confirm those cruel slanders upon my intellect which I sometimes overhear from the whispers of the stealthy attendants around me.
The Tomb
Just before dawn Arcturus winks ruddily from above the cemetery on the low hillock, and Coma Berenices shimmers weirdly afar off in the mysterious east; but still the Pole Star leers down from the same place in the black vault, winking hideously like an insane watching eye which strives to convey some strange message, yet recalls nothing save that it once had a message to convey. Sometimes, when it is cloudy, I can sleep.
Polaris
Sometimes I believe that this less material life is our truer life, and that our vain presence on the terraqueous globe is itself the secondary or merely virtual phenomenon.
Beyond The Wall of Sleep
I yearned mightily to enter this fascinating yet repellent city, and besought the bearded man to land me at the stone pier by the huge carven gate Akariel; but he gently denied my wish, saying: "Into Thalarion, the City of a Thousand Wonders, many have passed but none returned. Therein walk only daemons and mad things that are no longer men, and the streets are white with the unburied bones of those who have looked upon the eidolon Lathi, that reigns over the city."
The White Ship
But he was unmoved, and cried: "If I am mad, it is mercy! May the gods pity the man who in his callousness can remain sane to the hideous end!"
The Temple
Life is a hideous thing, and from the background behind what we know of it peer daemoniacal hints of truth which make it sometimes a thousandfold more hideous. Science, already oppressive with its shocking revelations, will perhaps be the ultimate exterminator of our human species -- if separate species we be -- for its reserve of unguessed horrors could never be borne by mortal brains if loosed upon the world.
Facts Concerning the Late Arthur Jermyn and His Family
Kuranes was not modern, and did not think like others who wrote. Whilst they strove to strip from life its embroidered robes of myth, and to shew in naked ugliness the foul thing that is reality, Kuranes sought for beauty alone.
Celephaïs
*There are not many persons who know what wonders are opened to them in the stories and visions of their youth; for when as children we learn and dream, we think but half-formed thoughts, and when as men we try to remember, we are dulled and prosaic with the poison of life.
Celephaïs
But some of us awake in the night with strange phantasms of enchanted hills and gardens, of fountains that sing in the sun, of golden cliffs overhanging murmuring seas, of plains that stretch down to sleeping cities of bronze and stone, and of shadowy companies of heroes that ride caparisoned white horses along the edges of thick forests; and then we know that we have looked back through the ivory gates into that world of wonder which was ours before we were wise and unhappy.
Celephaïs
I have harnessed the shadows that stride from world to world to sow death and madness...
From Beyond
Searchers after horror haunt strange, far places.
The Picture in the House
By necessity practical and by philosophy stern, these folk were not beautiful in their sins. Erring as all mortals must, they were forced by their rigid code to seek concealment above all else; so that they came to use less and less taste in what they concealed.
The Picture in the House
I recall that the people went about with pale and worried faces, and whispered warnings and prophecies which no one dared consciously repeat or acknowledge to himself that he had heard. A sense of monstrous guilt was upon the land, and out of the abysses between the stars swept chill currents that made men shiver in dark and lonely places.
Nyarlathotep
Wherefore do ye toil; is it not that ye may live and be happy? And if ye toil only that ye may toil more, when shall happiness find you? Ye toil to live, but is not life made of beauty and song? ... Toil without song is like a weary journey without an end. Were not death more pleasing?
The Quest of Iranon
Posted by Rob Kuntz at 9:01 PM

All good reasons why he was and is one of the few fiction writers I enjoy.
--My early teens were filled with him, Poe, and Ellison, which explains the resultant me a good degree. ;)

I hear you, TS. It was the same for me, with great doses of CA Smith, Tolkien and Vance, but also of Chandler, Hammet and Cain. Reading the latter three taught me the economy of words that all good writers should all be aiming for.