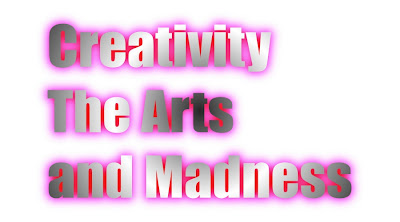 "Men have called me mad; but the question is not yet settled, whether madness is or is not the loftiest intelligence-whether much that is glorious-whether all that is profound-does not spring from disease of thought-from moods of mind exalted at the expense of the general intellect.
"They who dream by day are cognizant of many things which escape those who dream only by night.  In their grey vision they obtain glimpses of eternity.... They penetrate, however rudderless or compassless, into the vast ocean of the "light affable."
(Edgar Allan Poe, cited in Galloway, 1986, p. 243 )
"Since the time of the Greek philosophers, those who wrote about the creative process emphasized that creativity involves a regression to more primitive mental processes, that to be creative requires a willingness to cross and recross  the lines between rational and irrational thought."
(Maureen Neihart, Psy.D.)
The article is here.
Posted by Rob Kuntz at 8:25 PM

There is a lot to be said on this subject...

That's not just the abstract; that's the whole article. The abstract is just the part before the epigram (the quotation from Poe). It's following a rather formulaic organization structure for a type of essay called a Review of Scholarly Literature (which is essentially a research paper summarizing what other people have researched) that is often used in the social sciences to provide a broad overview of a subject area.

I have access to a scan of the original article in The Roeper Review if you are interested.

Do note that the article is dated 1998 (and it was originally written in 1997). There has been lots of new research in the link between creativity and the arts, with an emphasis on brain chemistry and blood flow, using fMRIs and other modern medical investigative techniques.