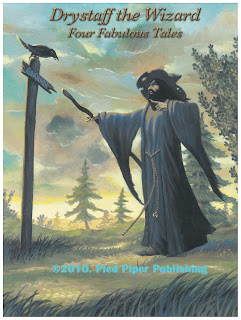 Poor Drystaff. Foiled again.
He sounds like an interesting character. I feel bad for him, though. He is hungry and just got scammed out of his money!

I hope he finds the pot of gold.

Drystaff is a classic - definitely some of Rob's best work. I highly recommend it!

Once the humour is dropped out the story is more concrete and very damn good. I like that you added terms and slang into the book, which adds to the atmosphere of the book like taking a trip elsewhere, where od's and mar's are used in everday commerce. What sort of element or pace are you planning with the Drystaff series?, is it a an action adventure i.e burroughs/howard, or a epic journey i.e tolkien

Looking forward to Black Festival arriving in the post :-)

@Delve: To Explain. The first story "QftVV" as appearing in SR #6 (1976) in literary terms was a thinly disguised political farce/lampoon. All the stories still have humor, as in Vance's Cugel cycle.

The story is one of self discovery. Drystaff has been ejected from his former order of "Magicians Purplex" for having failed to recover an important book (q.v. SR #6 tale). In doing so he has also revealed his magical impotence (his memory loss as referred to) that confounds his spell-casting. His "beguilers" have named him "Drystaff," indicating his impotent state, as he does not remember his real name or past. The background for all of this is reiterated throughout the short stories and his culminating quest in the novel resecures his past identity and powers. So, the cycle is actually complete with these 4 short stories and the novel. I might write more short stories of his misadventures, expanding on other passages, but that remains to be seen. Thanks for the kudos! :)

@Bubbagump: Your copies of BF are on the way!: [David is the editor for BF and the Drystaff cycle of stories]. Thanks David.

@Journalizer: There's more to your sentences than you can know. :)

Very cool, Rob. Very cool indeed. I'm honored to be a part of it.