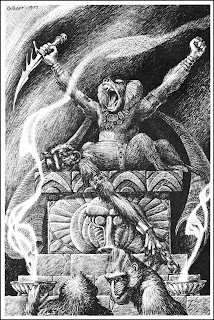 Link to Art of George Barr.

While you are at it enjoy some music:
Posted by Rob Kuntz at 8:04 PM

And to think he does a lot of sketches in pen...ball-point pen! Egads! He is a Hero of The Art.

any relation to Donna Barr (Stinz, After Death, The Dreamery)?

I'm not sure if they are related; probably a coincidence that they are both illustrators/artists.

I found another link for Barr as well:

"I have no descendants, so the things I can make are all I can leave behind."

And she is from a family of 6 siblings.

Another similarity or coincidence is that Donna B. has a series of stories involving Pfirsich Rommel, the fictional homosexual younger brother of Erwin "The Desert Fox" Rommel, and George B. published a short story in a book entitled Lesbian Short Fiction, (though he swears he isn't one), and did several illustrations in Embracing the Dark, an anthology of horror fantasies featuring gay werewolves and lesbian vampires, among other interesting characters.

Each raising the Barr in their own expressionistic fashion...