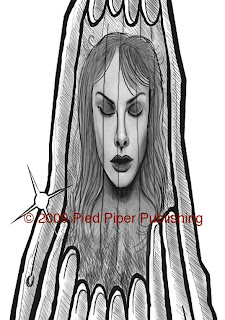 Here is a new magic item sample from the Boreal Level due out in December.  Text sampling by me and the illo by great ole Andy "Atom" Taylor.

This is the permanent habitat of Wynsom the ice-sylph.  She was imprisoned herein by the Frost King, Iraggo, many years ago; and he at times summons her to answer his questions of what she knows, or to entertain him.  He has earlier informed her that the more she cooperates with his desires that the more likely he will be disposed to releasing her from the containment.  Wynsom has been no fool, however, and she often tells the giant only fragments of what she perceives he wants to hear and often couches her advice in the riddles of her kind.  The latter infuriates Iraggo, but he has kept an ever-growing journal (see the entry for Ice Sheaves) of their back-and-forth communications.  Most of these unsolved riddles are just the indecipherable remains of their banter, but some have within them traces of truth and wisdom that Irrago cannot fathom.

The icicle has a flat base and tapers to a point at 9” in full height.  Operating it requires setting it base-first upon one’s palm.  However, the icicle emanates an extreme coldness that damages the holder for 6hp/round held.  During this time no concentration can be maintained to invoke the icicle’s power and thus summon her presence. Only those employing protection from cold (i.e., spells or similar) may wield its powers without harm or interruption.

When first observed, its outer surface portrays an opaque ice, rough and encrusted with an icy film.  If held in one’s palm for more than a turn, the film begins to noticeably melt, and as the liquid runs down its length the encrustations are replaced by a clear and polished surface.  An image of a silver-haired and blue-eyed lady rises from its depth, a miniature but animated bust of a white clad elfin-like figure, which is Wynsom. ...
Posted by Rob Kuntz at 6:50 PM

Interesting item indeed. My first question is, naturally, how do you free Wynsom?

Well, it is a sample only I extracted from the text and is meant to show the design
flavor, along with the illustration, of the upcoming product. So please forgive me for not giving away all of its secrets. But in this case there are two ways: On another level of the Original Castle I designed; and on the outdoor. These two areas will have separate ways of releasing her, and in reward, she will grant a "favor" to her rescuers.

I know, that's a bit cryptic, but I hope that you do purchase the product as it will not disappoint.