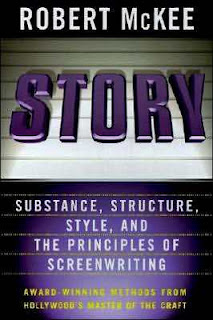 Robert McKee is well known as a screenwriting guru, but his emphasis is on storytelling techniques that are applicable to all forms of writing including those used in the RPG industry.

"Robert McKee, born 1941, is a creative writing instructor who is widely known for his popular "Story Seminar", which he developed when he was a professor at the University of Southern California. McKee is the author of a "screenwriters' bible" called Story: Substance, Structure, Style and the Principles of Screenwriting. Many of Hollywood's active screenwriters claim him as an inspiration. Rather than simply handling "mechanical" aspects of fiction technique such as plot or dialogue taken individually, McKee examines the narrative structure of a work and what makes the story compelling or not. This could work equally as well as an analysis of any other genre or form of narrative, whether in screenplay or any other form, and could also encompass nonfiction works as long as they attempt to "tell a story"."

The following interview is 61 minutes in length.

I think the link between RPG's and scripts/theatrical writing isn't addressed enough.

RPG's should be used in every first year drama department.

I've got that book on my shelf, and it really helped me improve my writing. I definitely recommend it. McKee knows his stuff, and yeah, it can help with RPGs as well as fiction/screenwriting.

Funny you should mention that, Scott, as I recently informed my current publisher that I had been working on a "book" regarding that very subject, of which I have nearly 6.000 words written on. I may try to finish it (or at least make more headway with it) after current projects are cleared from the desktop.

Of course this harkens back, as well, to the articles I blogged on PLAY and Improvisation, specifically those pertaining to Viola Spolin, Neva Boyd, Sally Jenkinson and Diane Ackerman, as well as others.

FWIW, some University of Chicago classes were using D&D in 1974-1975 as a teaching medium, though I do not have specifics on what classes they were used in, but do understand that they were utilized to promote socializing and logic and analytical skills at the very least.

Thanks for the commentary. :)

McKee is excellent, and I am glad someone else here has read him. His insights for budding writers are golden, no matter the medium or genre they adhere to. Thanks for commenting! :)