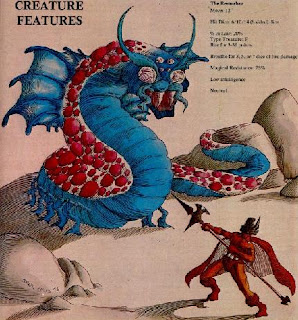 One day while going about my TSR duties at Williams & Marshall Street, EGG waved me into his upstairs office and showed me the picture posted here. He noted that it had been drawn by Erol
Otus, that he liked it, but didn't have any statistics for it, nor even a name. He handed it to me asking if I'd create the beast; and so I did, name and all, though no proper credit appeared in the DRAGON's Creature Features that I am aware of. Erol is another interesting soul who I had the pleasure of meeting and talking with again, after so many years, at GENCON 40. If anyone knows his e-mail, please send it to me so I can invite him to discuss his past, present and future art projects and pull down some insight from one of the "old time" artists who strongly influenced the D&D game in its many phases.
Posted by Rob Kuntz at 3:54 PM

I may be able to help you with getting in touch with Erol Otus. Let me send a couple of emails and get back to you.