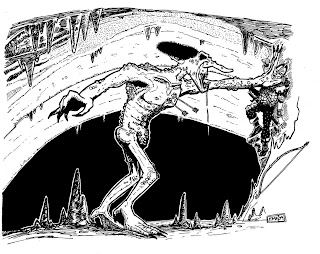 Castle Greyhawk was notorious for them. Robilar, Terik and Tenser fought them (often en masse) and Robilar suffered at their hands the one time he lost his bearings in the Castle (a tale that is already written about that 1972 adventure and will be appearing in the book due out late this year or early next: Lord of the Green Dragons™). Enjoy watching an elf geting his come-uppins' from the FC ink for one of the Six Original Castle Levels I am finishing for release this year. Drawn by Edward Kann, one of our team members.
Posted by Rob Kuntz at 11:31 PM

LOTGD Sounds intriguing; and thanks for the chance to participate in this blog venture - feels like a privilege for sure.

Just for the record, as a bit of a troll admirer myself, I wonder if you could say something about where the archetypal early troll came from - the how and why and what of it? Were there clear sources and prototypes for its abilities and traits?

EGG derived it from Poul Anderson's great tale,
"Three Hearts & Three Lions." At least its fierceness and ability to regenerate. IMO, considering how many we'd eventually meet in the
earliest adventures, I'd go as far to say that it was his favorite monster. At a very early age of 13 in 1968 (while hanging out at the Gygax home as I usually did on a daily basis),he thrust that novel before me and recommended I read it; and it would only be several years later that this connection from the book would come back to haunt me; and he'd remind me of that story every time, while chuckling, as it did.

That explains a lot! Thanks for the insight, it does the soul good to hear such hearty origins

Troll's are one of those iconic First Edition Monster's, I really love that thin spindly old-school Troll look!They are definately one of my favourite monster's. And yep, they have always been associated with Castle Greyhawk.
Even Grayhawk Ruins was full of them.