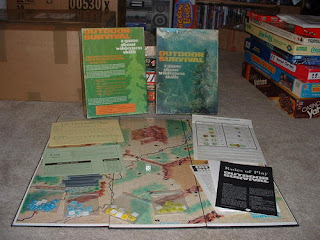 I have read with great interest several articles around the net describing the start of Living Campaigns. The idea is that these started with a certain edition of the D&D rules proceeding the original brown box version. I am now casting my two pennies into the mix, not just because I can, but because that's the only way to get rid of copper pieces these days. ;)

First, the term "Living" strikes me as a misnomer, really, but for clarity sake I'll use it here, as the idea of campaign play seems less understandable within its multi-tierd meaning.

When EGG created the one map for City of Greyhawk and the first Castle Greyhawk (12 levels), we had the start of the first campaign in Lake Geneva, 1972. As noted in EGG's introduction to my adventure, Mordenkainen's Fantastic Adventure (WG5), Gary played in a castle/area that I had designed, (N.B., but I had designed no supporting town or city as he had). That was about a month into him starting Greyhawk. So this is the second campaign created in Lake Geneva (late 1972 to early 1973). Both of us were using the Outdoor Survival game map for outdoor adventures then as there was no area map for either of our imagined locations. Gary in fact started in the "mists" when rolling his first PC, Yrag. Later, he was to adventure with other rolled PCs, Mordenkainen, etc., as EGG was very much taken with building his own clan based around what he later named the Circle of Eight in my mileu, which we located on the same OSMap. Note that EGG had two main PCs as I allowed for him to have an additional one as I was for the most part running him solo (but do read hereafter). Then there came a rash of his NPCs as noted in his Up on a Soapbox stories of his adventures within my "campaign" structure and as appearing in The Dragon magazine, a goodly run of 30 stories, in fact. Note an extract from one hereafter (bold emphasis mine):

...#11. Roleplaying for the Dungeon Master: Virtue brings more than its own reward.

Back in those early halcyon days of D&D, all of my time was not spent developing the Greyhawk campaign environment and then serving as Dungeon Master for the ever-growing throng of players. Indeed, after only a few weeks time there were plenty of others working to create campaign settings like that I was doing. So I was offered many opportunities to play, and I did so in about a dozen different settings with as many different DMs. Thus came into being my first PC, Yrag. Now it so happened that the most eager of these other fledgling DMs was Rob Kuntz. Because he took to the new game like the proverbial duck to water, playing in his campaign was a lot of fun, and I did that wherever I could, side by side with many of the regulars from my own campaign. It was in one such adventure that Rob introduced a new cursed magic item, the ring of contrariness. Likely because I was a very intense player myself, Rob made sure that Yrag ended up with the item. The doughty fighter being a risk taker, Yrag immediately put the ring on his ringer. At that point, I was taken aside, and the properties of the ring were explained to me. Laughing silently to myself, I returned to the group.

... someone asked. “What does the ring do?” To that Yrag replied, “None of your business!” As the adventure was just beginning, another player said the matter could be set aside until later, as his character said. “Let’s go” and moved away. The other PCs followed. Yrag sat down. “Come on,” someone urged him. “No, I am staying here.” Being a close-knit band, the others then came back, saying they too would stay. “In that case, I am leaving,” muttered Yrag, as he stalked off. ... After about 10 minutes of this it became apparent to the other players that I was roleplaying, that Yrag was under some malign magical influence that made him uncooperative. Of course I played it to the hilt. For example: “You can’t take the ring off, can you?” Terik tried, to which Yrag responded, “Yes I can, but that’s what you want, so I won’t.” Then, “Yrag, pummel yourself!” suggested Murlynd. “No, I won’t do that, but I’ll smite you!” roared the fighter now in a growing rage. ... Finally, they came up with a means of defeating the contrariness curse ...

So Murlynd (Don Kaye) and Terik (Terry Kuntz) had started as PCs in Greyhawk and easily moved between that area and my own. Also note that EGG refers to that area as an "environment," which is indeed a better descriptive, as there was no defined area, per se, just a relative image in our minds due to the position that each castle and environment maintained on the Outdoor Survival map in relation to the City of Greyhawk.

And so here we note that, indeed, this is the start of the first true "Living Campaign," which was to go on to merge as one with me becoming the co-DM of Greyhawk and thereby transferring my creations, such as levels, gods, magic items and sundry ideas into that combined campaign structure. After that time there was only one campaign, really, as EGG and I had never thought otherwise about such divisions, and the process seemed a natural outgrowth of play. However, when we realized that this could ultimately mean an over abundance of sharing across many campaigns then starting (Ernie Gygax's, Terry Kuntz's, Don Kaye's, et al), then EGG & I instated a firm rule that PCs adventuring in our campaign would thereafter have to obtain permission to do so in others, and this was not usually forthcoming, especially if the DMs were known to be of the lax sort who gave away too much bounty.
Posted by Rob Kuntz at 9:01 PM

Rob, you are The Man.

I didnt know that story about the ring. Such a simple item (and cursed!), yet, so fun!

Rob, this is a great read!

I was pretty tired last night and thus made a lot of grammatical mistakes writing this, so am now editing/clarifying today. :) This in no way changes the content.

I still use the Outdoor Survival map to represent the wilderness of my current campaign.

Cool, James. I still have an old OS game from that day and a special map made from it, as well.

Don't use it much anymore, though.