UP ON A TREE STUMP #1: Imagination Squared 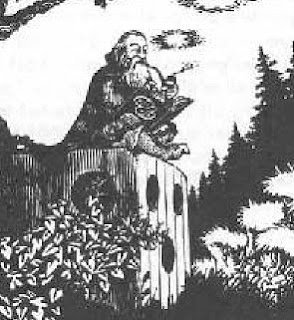 I have had many people over the years ask me where I get my inspiration from for all of the various projects and ideas I have furthered through print. It's not from the copious amounts of coffee that I drink, I assure you. But let me offer a refrain here which is best studied in light of my own perceptions of things creative.

Reading has always been a good start for me; but rather thinking, I'd say, has been the other. But when all is said and done, thinking has a back seat to both seeing and doing. Somewhere in that combination of reading, thinking, seeing and doing do the creative spurts rise and fall. But let me explain one facet that may have come as a surprise to some, a mere curiosity, perhaps. Seeing. What is meant by this? In my life I can look at things, but whether I see them for all of their intrinsic value is another thing altogether.

I remember while EGG and I were working on Greyhawk: Supplement #1 to Dungeons & Dragons, that I was employed at a wood working factory. Drudgery for sure, hour after monotonous hour. I sought relief as I always do through the wiles of my imagination, casting my eyes about my surroundings when I had a chance to do so. During one of these excursions of thought and sight my eyes came to rest upon end pieces of wood I had been trimming off, all in a pile to my left. I concentrated on a single piece, noting its symmetrical shape. As my mind was then inured with thoughts of getting home and crafting some more for our booklet, I became rapt. People may say that this is when it hits you, these ideas. But what I saw were possibilities yet unimagined. It was but a cube of wood, was it not, this all flashing before my mind, yet excitedly so, for I had latched onto a form in thought and sight, and now my thinking process was flowing with all the possibilities.

It didn't take too much time thereafter to sort out those possibilities. Stooping, I picked up the all so now interesting cube of wood and held it in my palm. It fit very well there. Clenching it I imagined just as in my youth with so many imaginary objects, some real, some as invisible as my thoughts had been then, that I summoned a power from it. But what power? I looked upon its many faces again, rotating it. Hmm. Like our many dice we rolled, it was. Six sides. Six powers? Each side represented a square face. Hmm. A shield? Ah, force shields! [Edit:  I always loved force shields and was fascinated by them; and it's funny how the imagination works to bring seemingly disparate parts, like these ever-changing parts that children experience while in play, together.  So by way of the cube, as I was to recall later, my fascination with force shields, specifically this one as noted on television's Outer Limits episode, "The Bellero Shield," meshed with the object.  So the object became the final focus for the idea (memory-fascination) and thereby became one.]

Setting the piece down amongst its brothers, I finished my day, walked home, and promptly wrote the Cube of Force, which to this day survives in many renditions of D&D. I am proud to say that this inspired piece was well received by my counterpart, as was the story of its creation.

So, Seeing, not just Looking, in this life, is to peel back possibilities untold, amongst stories heard by rocks and whispered by trees who tell of the inexplicable passing of creation. We need only immerse ourself in it to find the romance of life and therein our imagination squared.
Posted by Rob Kuntz at 8:37 PM

Labels: UP ON A TREE STUMP

Man, I dig these origin stories.

Me too! It just prooves the worth of a great imagination!

Yes, imagination is key to final realization; but more importantly, taking an active interest in life in general and all of its component parts is the source of Seeing, or so it has been for me. For example: walk a path you take everyday, back, then forth, maybe for years. Now one day just stop at several different points along that path and for a space in time just rotate and look around, noting the objects, however small or large, seen during this exercise. It is surprising what one actually misses when they take their surroundings for granted. Though I didn't mean for this to sound "instructional" I felt clarification was needed as the main point wasn't about imagination only, but how to initiate and magnify the available content for its use through the lens of seeing.