Orcus, God of the Underworld 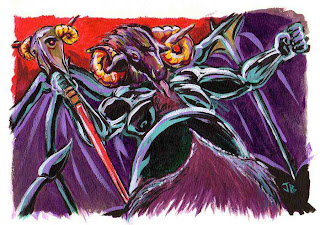 Something I have in the works and so wanted to share. The image is rendered by Jason Braun.

ORCUS
A Rethinking of the Ancient, Roman God of the Underworld

The Roman god, “Orcus,” was a god of the Underworld, parallel with Pluto and thus with the Greek god, Hades, and by some affiliations with Dis (Dis Pater) and Tartarus. He seemed to have many forms and faces in keeping with the changing cultural view influencing this. There have also been relationships drawn between him and the Etruscan myth; and a depiction of a Cyclops at Tarquinia was errantly confused for him.

We can with all certainty put these gods in one basket, so to speak, and from there draw forth matter for use in creating FRPG material. The most extant matter on the amalgam of these classical underworld gods exists in the form of Pluto (Hades).

“Mortals, when they called on his name, beat the ground with their hands, and, averting their faces, sacrificed black sheep to him and to his queen. He is also known as Dis, Orcus, and Tartarus.”--Classic Myths In Ancient Literature, C. M. Gayley, 1893. [Emphasis points mine.]

That E. Gary Gygax included Orcus in the 1st Edition of the Monster Manual as a ram-headed “demon prince” of the Underworld, and in connection with the undead, gives more than ample proof to the derived source for this. In classical myth Hades was the least revered of gods, the least called upon and the most cursed, and common opinion of him was in fact so negative that it equated him with personified evil, which might be noted in particular in Aristophane’s play, “The Frogs,” wherein the Underworld is described according to the prevailing opinions of the time as a foreboding place of horrors. That mortals sacrificed black sheep to him is also noteworthy when comparing the rams head that EGG describes Orcus as having. In conjunction with this, that “mortals beat the ground” and averted their faces while offering this sacrifice is notable.

“When a person imitates the evil he would repel--grinning like a wolf to ward off wolves, smearing his face with blood to ward off blood and death, making thunderous noises to drive away thunderstorms--anthropologists speak of homoeopathic magic; when he makes use of some object, such as hair or nails, which has been a part of or has been in contact with the individual, the name contagious magic is given. The general term sympathetic magic is applied to both types, for a mysterious sympathy is supposed to exist between the object to be influenced and the object which is like or has been in contact with it. Often the rite is both contagious and homoeopathic at the same time.”--Taboo, Magic, Spirits: A Study of Primitive Elements in Roman Religion; Eli Edward Burriss, 1931. [Emphasis mine.]

We can assume here that the ancient Romans beat the ground to get Pluto’s (Orcus’) attention; and in so doing they averted their eyes, as he was the god of death and was not to be looked upon if he should appear. To this precise formula they added a sacrifice of a black sheep, no doubt due to another ritualistic reason which likely had a deeper meaning beyond a simple offering. And perhaps this related to his appearance, imagined or legendary.

Sheep were offered to gods on many sacrificial occasions, and thus a black one could have meant nothing more than a similar color relationship with that of the dark Underworld. But if this were the case, then the sympathy part of the normal ritual would have had no room for full exploitation in this instance, and in petitioning gods the Romans and Greeks were very elaborate and precise in their details. Therefore every action and material conveyed through these had a specific meaning, and more often compound ones. Did they offer the black sheep because he was like it in some form or another?

Though the true answer to the question of his appearance remains beyond our grasp, the citations provide enough primary and secondary information to build upon this by way of imaginative extrapolation. Thus one can easily create information about Orcus and the cults that worshiped this aloof god in his many forms...
Posted by Rob Kuntz at 12:18 PM