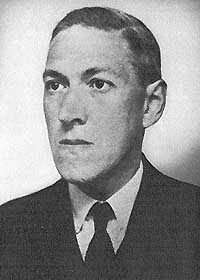 I've spent a lot of time over the last year delving deeply into the literary origins of Dungeons & Dragons -- the books and authors that influenced its creators and its earliest players and referees. My "Bible" for this is the fabled Appendix N from the Advanced D&D Dungeon Masters Guide, where Gary Gygax laid out a list of "inspirational and educational reading." The books and authors Gygax noted as being most immediately influential on him were almost all fairly old -- some might even say "old fashioned" -- by the time the DMG was published in 1979: L. Sprague de Camp, Fletcher Pratt, Robert E. Howard, Fritz Leiber, Jack Vance, Abraham Merritt, and H.P. Lovecraft.

The last name in that list is quite interesting, since Lovecraft is the only author among them that's generally considered a "horror" rather than "fantasy" writer. Leaving aside for the moment that such a fine distinction is of fairly recent vintage (and not completely accurate even in this case), HPL does rather stand out as an anomaly. Lovecraft's protagonists are scholars rather than swordsmen and are often "rewarded" for their efforts with the insanity that comes from the knowledge of humanity's ultimate insignificance within the cosmic scheme -- hardly the stuff from which D&D adventures are made!

Or is it? Certainly Lovecraft's worldview was very different than that of his friend and correspondent, Robert E. Howard, for example, but it was by no means devoid of heroism. For Lovecraft, humanity and all its works are as nothing compared to the Great Old Ones and their servants. Despite the inconsequential nature of human existence, some few soldier on, braving the dark and sacrificing their lives and minds to preserve all that they've known and loved for just one more day. There may be no stopping the inevitable time when the stars shall again be right and dread Cthulhu and his minions arise once more, but a heroic few will nevertheless attempt to stave it off for as long as they can and their struggles to do so make great fodder for D&D.

The earliest players of the game recognized this, which is why issue 12 of The Dragon included an article on "The Lovecraftian Mythos in Dungeons & Dragons," much as early printings of 1980's Deities & Demigods did as well. The Original Campaign was no stranger to such horrors either. The Temple of the Elder Gods was one of its early adventures and it drew heavily upon Lovecraftian themes, as did its "sequel," Fomalhaut and even parts of the Bottle City. And of course, the faction of drow attempting to establish an alliance with the giants in the classic G-series modules worshipped a tentacular deity known as the Elder Elemental God, a being of writhing, amorphous appearance. Likewise, the evil deity Tharizdun -- whose name was derived from the earlier Tharzduun -- has decidedly Lovecraftian overtones, being imprisoned to prevent his destruction of the world and served only by madmen.

Like so much in D&D, even Lovecraftian ideas are imported to serve the game, not vice versa. Consequently, a HPL purist would probably balk at the somewhat humanistic spin given to many of the Old Gent's ideas, never mind the treatment of the Great Old Ones and their servants as mere monsters, albeit very powerful ones. In D&D, victory against the dark isn't necessarily eking out just one more day of respite before the final, mind-shattering End comes. That approach, so powerful and poignant in Lovecraft's own writings, is a poor fit for the pulp fantasy superstructure of D&D. The earliest creators of the game understood this, but it didn't stop them from drinking deeply from the works of Lovecraft and his imitators, all of whom left an indelible mark upon the game that's visible, however faintly, even today.
Posted by James Maliszewski at 10:46 AM

Very nice James. It inspired me to write a very long article which relates and which, in between other duties (now at 500 +/- words), I am crafting
and hope to post before Saturday, and thus before Robilar takes leave for parts unknown here on the Wild Coast.