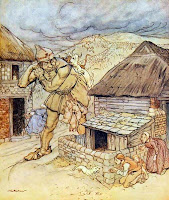 If it wasn't evident enough in all of his works, here's some more "origin" stories about 4 magic items that appear in D&D, all from the tale, Jack the Giant Killer.

I had read this as a child, of course, but EGG was always fond of retelling it, and did love to repeat the "Fee, Fie, Fo, Fum" on occasion and when you were suitably trapped in the game by a giant. He loved giants. He totally befuddled his son with a giant encounter wherein Tenser bargained for what was in the giant's bag (nothing but old clothes and such); and he certainly did them justice with the G-Series of modules, some of his best adventure crafting, in fact.

Note the extract from the downloadable PDF file, below, for the magic, of which I am sure EGG has commented upon in part or whole, elsewhere; but it is here presented in full. Note that I include the "cap" under what was to become the Helm of Understanding Magic and Languages (i.e., knowledge).

And do note that my humble creation, the Bean Bag (as included in Greyhawk: Supplement #1 to D&D, and then in later editions), was inspired by a related tale, Jack in the Beanstalk. You might say EGG and I "sprouted" from the same garden...
Posted by Rob Kuntz at 9:19 PM

I don't know... I feel it touches some deep root I didn't find for many years in gaming. Maybe it has to do with the early tales of my childhood, along with the Greek mythology my mother was reading to me in my bed. These things resonated later with the discovery of D&D. Maybe these are some of the components that were losts along the game's evolution?

It's called "enchantment" and ties in very well to Algernon Blackwood's assessment that as we grow older that we lose that enchantment we once held as child, that feeling that had us running back for the next story telling, and then in later years, the same enchantment that lead us to FRPG, only to have the fantasy stripped down and pared by endless rules that attempt too concretely to remake that furthering of creative and imaginative endeavor which came naturally to us as children. That is where, IMO, we find the incongruities of what we feel and what is; and therein, if recognized, do we find through our participating within this unique realm of feeling, the growing or stifling of these again. It's the story, the level of mystery, a fine point of departure, a balancing, if you will, that must merge ever so adroitly with a game's "rules", and if the gaming aspects of achieving that end stifle any of its most important components which add to deriving that feeling of enchantment again, then this, by course, tends to lessen the experience in that regard.