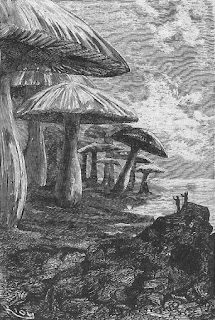 "Consequently, Little Wars influenced my development of the Chainmail miniature rules and the Dungeons & Dragons fantasy roleplaying game. For example, it established the concept of a burst radius for cannon rounds, an idea that was translated both into the Chainmail catapult missile diameters and the areas of effect for Fireballs in D&D. ..."

"...Well's treatment of subterranean humans in the Time Machine certainly reinforced my concepts of underground adventure areas other than dungeons (as did Jules Verne's Journey to the Center of the Earth...)"

Wells also influenced David L. Arneson with his City of the Gods and without a doubt myself and Gary on yet another level with Expedition to the Barrier Peaks.

Verne was a favorite of mine, and I was always enthralled by the movie adaptation of Journey to the Center of the Earth starring James Mason and Pat Boone. One can almost feel being underground and project themself into those twisting caves and passages. The favorite maps that I've drawn over the years involve large, complex cavernous areas, and I am sure I was influenced by that movie to a great degree.

The D-series by EGG: This has roots in Burrough's (and later Holme's treatments) of Pellucidar (and Mars), and certainly we can draw parallels to pieces written by HPL (At the Mountains of Madness, et al) and of course A. Merritt (Face in the Abyss, et al), and most certainly more of Verne's "A Journey..."

I have admitted to REH's influence upon my creating the terrible iron golem and more recently to Poes's influence from Fall of the House of Usher and the movie Forbidden Planet, both of which contributed different aspects to the Maure Castle family and adventure information as conceptualized for Dunegon Magazine (#112, #124 and #139), such as the ID Core.

My upcoming project, Dream Land is part OZ, part Matrix, part Alice in Wonderland, with a sprinkling of Lovecraft's The Dream-Quest of Unknown Kadath.

I have admitted elsewhere over the years that Tharizdun (EGG's take on the 1 1/2 pages I wrote for the dark god Tharzduun©) was influenced by C. A. Smith's Lord of the Seven Hells, Thasaidon.

"Lord of the sultry, red parterres
And orchards sunned by hell's unsetting flame!
Amid thy garden blooms the Tree which bears
Unnumbered heads of demons for its fruit;
And, like a slithering serpeat, runs the root
That is called Baaras;
And there the forky, pale mandragoras,
Self-torn from out the soil, go to and fro,
Calling upon thy name:
Till man new-damned will deem that devils pass,
Crying in wrathful frenzy and strange woe."
-Ludar's Litany to Thasaidon

My work Dark Chateau has some solid and related roots pointing back to one or more of the authors as noted above, and if anyone here can correctly guess these, I will send them a special certificate of "Roots Detectivity," signed by C. Auguste Dupin himself! E-mail me at rjk@pied-piper-publishing.com with your deductions.

There are certainly more roots that others have "unearthed" in their quest to discover these, and I will add this encouragement to those quests, as I love a mystery myself: Be looking for more to come from this author's pen!
Posted by Rob Kuntz at 9:34 PM

Excellent entry. I must re-read some Edgar Allan Poe.

I enjoyed Jules Verne's Mysterious Island, 20,000 Leagues Under the Sea and Journey to the Center of the Earth.

And the movie version of Journey, fantatic ~ one of the few movies that were better than the book!