On the Power of "Primitive" Art 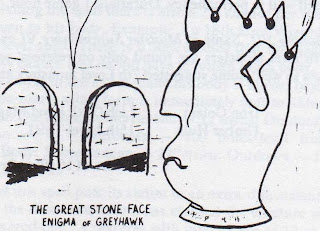 My own initiation into the hobby began with a copy of the Dungeons & Dragons rules edited by J. Eric Holmes. It wasn't until several years later that I obtained copies of the original rulebooks, the famed "little brown books" and supplements. I remember flipping through those small volumes and marveling at them. Crude and amateurish though they were in some ways, there was something primal about them, something that spoke to me on some unconscious level that I couldn't then explain.

The art played a big part in engendering this feeling in me. Greg Bell, an illustrator otherwise unknown to me, created much of the art in those early D&D books. The entirety of Supplement I's artwork was Bell's and, even though I could make many criticisms of it on a technical level, I nevertheless find it strangely compelling. It evokes a lot of odd feelings in me -- not unpleasant feelings by any means, but weird ones. Those early illustrations bring to mind the kinds of sketches I imagine one might find in the diary of an explorer to terra incognita, hastily drawing all the strange sights he sees in his fantastic journey. They're not precise; indeed they're downright impressionistic. And I think that's key to understanding their power. Like the little brown books themselves, what they don't show is as important as what they do.

That's why mysteries and enigmas have such a powerful effect upon one's imagination as well: the mind can't help but ponder the possibilities hitherto unrevealed. When I first acquired the original D&D books, I felt as if I'd stepped into terra incognita of my own, which was all the more odd, because I had been playing D&D for years beforehand and was certain I knew the game already. How wrong I was! Or rather, not "wrong" so much as limited in my perspective. The possibilities of fantasy are indeed vast and not easily cut and dried, to be placed in mental boxes and forever understood. There's a continual process of rediscovery and the renewal of the imagination it engenders. It's an amazing thing when one steps back to consider it and I think it's the reason why, even after 30 years of participating in this hobby, I'm still very much in love with it.
Posted by James Maliszewski at 1:41 PM

"The possibilities of fantasy are indeed vast and not easily cut and dried, to be placed in mental boxes and forever understood. There's a continual process of rediscovery and the renewal of the imagination it engenders."

Such a well written point, so reflective of understanding.

In life there is joy and dismay. Pain and beauty weep side by side and thus identify each other. And without dreaded wizards there would be no need for heroes to defend our springs.

I recall that the content of the original rule books was so technical and astounding to me, and the raw concepts of fantasy loosened from their traditional story space were so mind igniting, that the mere scribbles of illustration in the original pamphlets struck my imagination as if they were cloaked by a more delicate hand. And that's coming from a kid that was being raised in an artist's household, and who had been reared on well illustrated English storybooks. Of course, later on the spell wore off, but I certainly do recall its power cast over me!

The Tantra of Roleplaying!

Terra Incognita indeed - the very stuff of the imaginal. I think of roleplaying as a kind of process of 'bardo-making' - co-creating patterns of dream narrative, illusion, meaning, profoundl (and seductive) maya, every bit as rich as any other creative activity in life; a communal multi-linear magical endeavour, if you like - psychologically gravid, potent and, in its best expressions, of the same order as Keats spoke about when he named life as 'a vale of soul-making'. It can be a Temporary Autonomous Zone (TAZ) a la Hakim Bey, a playground for the imagination (but not a theme park).

Of course, it can also be frustrating, lacking in dynamics, even downright dull - it has feet of clay and a mundanity that can feel actively crushing to the imagination - precisely because it has such potential; because we care, it can be so self-transcending, and we sense this, know it deeply - therefore we have high stakes before us, in all sorts of ways.

It also reminds me of the old Rudolf Steiner point about the difference between cinema and theatre - one can deal with 'bad' cinema so much more easily than the experience of 'bad' theatre, because of a passive distance - the experience of the failing play or poorly acted part is visceral, it hurts us in our embodied presence, the bad film just bores us. Same (for me at least) with 'bad' roleplaying ('bad' as in somehow failing in its reach, failing to try, failing to 'leap' as Robert Bly might say).

Maybe the art works in a similar way - if the picture/illustration contains some power, some energy given form, then its 'technical' merits are secondary - it works as a primal howling, a violent or lurid lunging into being of chthonic impulses otherwise lost in anima mundi. There again, the slickest, most hi-tech CGI 'perfection' of form can feel appallingly sterile and arid all too easily, because it misses the emotional point, falls back into cleverness and the tyrrany of the mere surface, lacking any imaginal depth and impact.

So yeah, I love the old artwork, and some new things I see work for me too. But for me, the material (be it art or text or play itself) has to live, has to be felt, or else the experience collapses under its own weight, becomes another drab consumer choice in a flatland world of wasted possibility.

Roleplaying then (at its best, and for me) has to dance on the edge of the razor blade between feeling like the single most important means of expression possible in life at that moment, and being utterly empty - the kind of thing one could let go of without a second thought. Then, and maybe only then, when we simultaneously risk eveything and nothing, then some real joy can explode.

Vey nice post!
Also, i must say that the art in the early days have such a power, as you have mentioned :"Those early illustrations bring to mind the kinds of sketches I imagine one might find in the diary of an explorer to terra incognita, hastily drawing all the strange sights he sees in his fantastic journey."

Indeed, it evoke some deep thoghts about it. I still look at the "Enigma of Greyhawk" and somehow, it say a lot to me about the Oerth. Mystery, forgotten dungeons, long past events, and the feeling that something unknow may comes to life.

Per comments made on ENWorld or DF (I don't recall which), Gary drew the Great Stone Face himself, although he is uncredited for the art.

That is true Grodog. EGG in fact did some illustrating and painting in his time, and several of his paintings were hung on the walls at his house on Center Street. I'll touch upon that topic in another entry here as well, as I followed him along that illustration path (as alluded to in one of the Bottle City entries).

Gary drew the Great Stone Face? I don't think I ever knew that. Based on that, I'm guessing he also drew the carrion crawler illustration?

The style is the same, but I never heard from his lips, as I did with the GSF, that he'd drawn it, though it would come as no surprise now that he did, as James notes.