From Stratego to Sieges 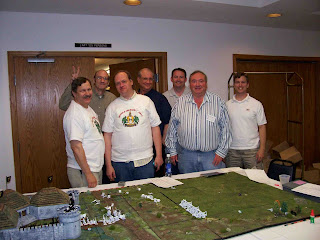 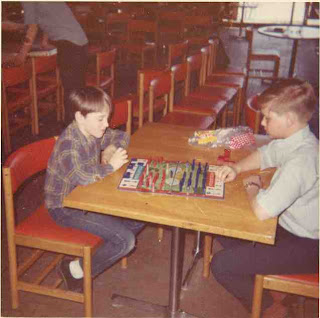 I include two pictures here: one of Ernie Gygax playing the red side and I the blue, in Stratego, snapped by John Bobek (see below) in Chicago 1968-1969, at the same convention I first played "Little Wars" at; and then at Lake Geneva Gaming Convention #1, where the members of the Castle & Crusades Society and honored guests and friends had gathered for Paul Stormberg's scenario, using the Chainmail rules, the Siege of the Moat House (as recreated from the Temple of Elemental Evil).

I'm the blonde-haired lad in the "Monkey's" boots opposite Ernie Gygax at the table; and the next picture, left to right: John Bobek (IFW Alumnus, Game Designer) being rabbit-eared by Bill Hoyer (IFW Alumnus, former President IFW, former employee of the RPGA/TSR); myself with Castle & Crusade shirt with King's COA (IFW Alumnus, etc., somewhat paunchy, have lost a lot of weight since); in blue and glasses, Jim Lurvey, former editor of the Great Plains Game Players Newsletter; next to him, Martin Wright the "Scanmaster" (may he rest in peace); in front of him Ernie Gygax (the one and only Tenser); and Paul Stormberg, who had the moat house constructed as seen at great personal expense, and who judged the event, a very good man indeed.
Posted by Rob Kuntz at 8:42 PM

priceless pictures, i must say...very nice to see those. maybe because my wife is a historitian, but im very found of pictures and the story behind them.

I still have my Stratego set from when I was a kid in the 70's. Lately, I've been playing it again with my 6 year old boy, and he has mastered it to a point where I must try my best to win if I want a chance to win. Great pictures, Rob.

after i saw the picture, i remembered how i use to like that game. Here in Brazil it was called "Combate" (Combat"), but before that was called "Guerra" (War) and even before, "Front". Th older ones (i suppose the one you played) had only the rankings. Mine (mid 80's) have faces. Now the re-release it here, with funny faces...I'm thinking on buying one just like the one i have (just found the pieces, not the board), as i cant stop thinking in playing with my kid (when i have one).

Heh. It was certainly one of the few boardgames that earlier on I could consistently beat EGG at; others took much longer earning my stripes, for example:

Chess: 2 years until first victory
Stalingrad: Same
and so forth

I didn't know that you knew Jim, Rob. Do you have any original membership rolls for the C&CS?

Nice pictures once again, and a great story to go with it. Thank's for sharing LotGD!:)

I loved to play Stratego. I used to imagine backgrounds for each of the pieces and wanted to play some special missions/scenarios with select pieces and particular goals to reach on the board. Alas, that never became more than an idea.

These pictures are absolutely great. I remember writing about this event on my own blog some time ago (here's the link to the entry, if anyone cares to have a look). Fantastic rendition of the Moat House as well, really.

I only regret that I didn't take more photos back then! But film was expensive and I was in college. Thanks for posting these Rob. Feel free to post some of the others I have at ConsimWorld.com/social. Your readers might like the old black and white photos.